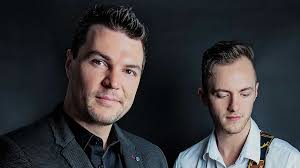 Danny Marx Young is a face you will recognise not just from his leading roles in accomplished and well-loved Aussie rock bands like the Aztecs, but also from working in film and television, regularly appearing on All Saints, Home and Away, and other popular network shows.
Young has been involved in many successful touring original and cover bands and his powerful vocal styling has received accolades from his professional peers. He has been involved in writing and producing music for many years and has worked with professionals alongside the iconic likes of John Paul Young (Danny’s father), Rose Tattoo, The Angels and AC/DC.

…”It always seems to be with consummate ease that Matt Jones delivers a live performance master class that audiences respond to on any level. He possesses an engaging on stage charisma that is in abundant display with not only his song choices but also in the way he interacts with audiences utilising his absorbing wit and repartee. His uncanny ability to reach his entire audience from the front to the back of any room is his trademark performance asset”. Matt Jones is a young musician that is regarded as a superb guitar player, powerful vocalist, and masterful entertainer that brings an already impressively long live performance history to every show.